Culture encompasses norms, values, believes, behaviours, how we get organised, roles in a group, communication, ways of doing things. When two or more people get together and bind themselves with the same attitudes and beliefs then we talk about culture.  Culture is a group phenomenon rather than an individual happening.

Culture happens in a nation, a business, in a department, sport club, a family, etc. Each group has its own elements that differentiates them from other similar groups.  One individual may be part of different cultural groups: a family, a sport club, a church, fashion, bridge moms, even a trend is a cultural group! 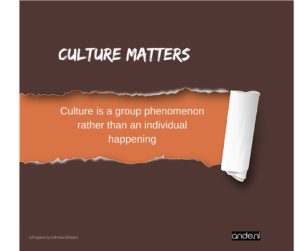