How have culture, politics and global awareness shaped initial approaches to Covid-19 across the world? 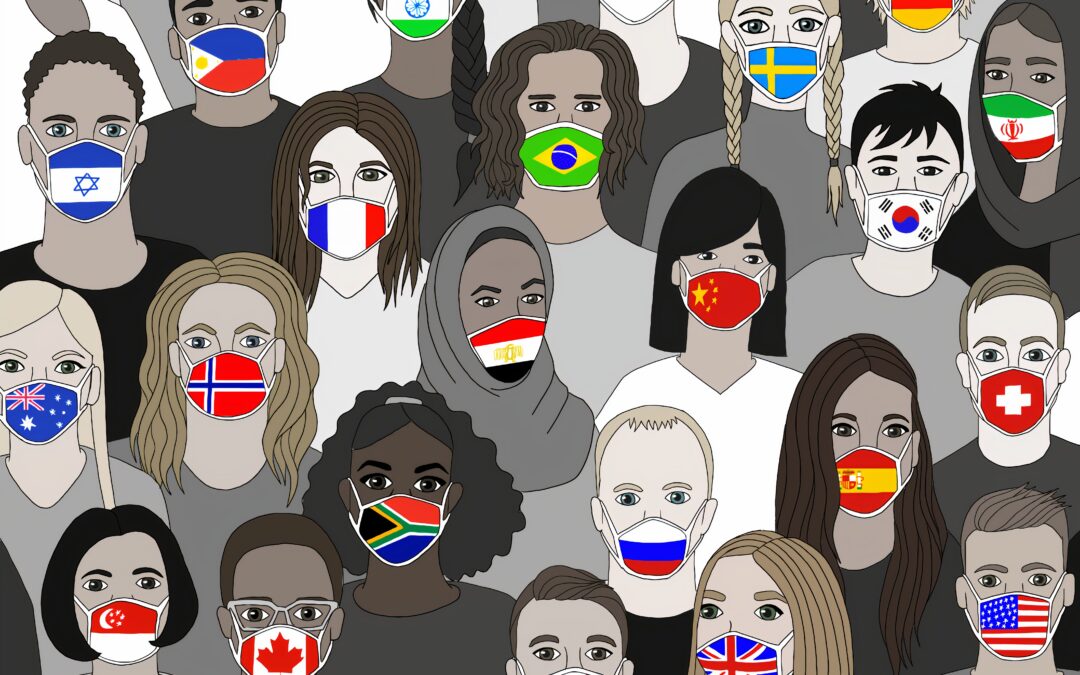 We have all seen the devastating impact of Covid-19 on people, economies and communities across the world. Covid-19 is a global pandemic, yet each country has approached its management in different ways.

Why is this and what does it say about politicians and people around the world?  Are the differing approaches linked to culture?

On a daily basis, we see news reports about the varying reactions to government measures – reactions that differ greatly. Some people accept the measures and follow instructions whilst others rebel with demonstrations and corona-parties or treat guidance with scepticism and ignore it.

Culture and its influence on our behaviour is an interesting way to understand what has happened and is still unfolding across the European continent.

Why did we not use a universal approach to solve the pandemic, pool resources and create a robust response? Although what we have may look like chaos – it is in fact, a dramatic demonstration of the  role culture plays in how we react and solve problems.

Take Finland, a country that suffered the ravages of wars for centuries. Since the end of the Cold War, Finland’s approach has been to be a country that is prepared! Taking preparation to the next level, Finland has been stockpiling medicines, raw materials and other essential goods for decades

As a result, when Covid arrived, the Finns were prepared, with all the masks, medicines and equipment they needed ready to for use. They also had an emergency plan prepared. Their past experiences had taught them to be always ready a lesson evident in many other aspects of Finnish culture.

Let’s zoom in some other countries and see how they approached the pandemic.

I have mainly explored countries with a number of similarities.

We know countries across the Asian and African continents have very different cultural responses to European countries. It was actually this thinking that caused me to begin to ask myself whether the differing approaches to tackling Covid-19 were affected by culture, politics or simply a lack of knowledge about this new disease?

I have based some of my observations and comparisons on Geert Hofstede’s 6 Cultural dimensions :

When we look at individual country’s responses to Covid-19 we can see that approaches to problem-solving are greatly influenced by the culture behind the people, groups and governments.

Let’s start by looking at a short definition of culture:

Culture is the way we do things here – .

With this quote, Elizabeth Godfrey hints that behaviour is a driver for how organisations, groups and countries are shaped. Yet of course, culture is more than just behaviour. Behaviours usually stem from common core values, assumptions and expectations.

Covid-19 was first detected in China and quickly spread though Asia.

The Chinese approach to the pandemic was organised, quick and strong.

China’s approach was based on lessons learned from dealing with previous infectious diseases. Yet, here in the West we have faced an ongoing struggle to find the right approach.

Why – one might ask – haven’t we just copied the Asian approach? It works – why not use it? Clearly, this is easier said than done.

There are many reasons why the Asian approach would not work in the same way here in Europe.

Amongst the many factors are our financial interests, the way we think about people, how our local politics work, lack of experience of these kind of pandemics and probably, also the way we perceive ourselves in the West.

Our perceptions of self play a huge part in each country’s culture, religion, politics, wealth and citizens. All of these elements affect our approach to problem solving and planning. For example, look at these six countries and their differing responses:

Once organised, the Italians made 3 key declarations to deal with the pandemic. The first one, signalled the first stage and was concerned with taking care of people and offering the medical assistance needed at the time.

Stage two dealt with the financial consequences of the serious and long lockdown. The third stage was a relaunch, geared to supporting the health system to be ready for a second lockdown if needed.

Italy is considered an individualistic society where each person takes care of themselves. People don’t trust politicians and there is a slightly chaotic, deal with it tomorrow attitude. However, once organised the Italians have been quite successful at managing the pandemic to date.

As a society with a collective outlook, the Spanish take a group approach rather than individual responsibility.

When the pandemic arrived, the government was not ready. The Spanish health system is run with a focus on day to day operations, meaning there is a lack of long term vision or forward- planning.

The result – a deadly combination of optimism and late detection. Today, Spain has one of the highest death tolls in Europe.

Apart from social distancing and self-quarantine, few other rules rulings were made whilst politicians addressed the nation on the importance of individual responsibility.

The outcome created chaos due to the widespread fears that quickly developed as people were ordered to do things that they didn’t fully understand. Communication of the measures were unclear and the decentralised healthcare system was not ready for the pandemic.

There were no masks, equipment or medicines. Supplies ran out swiftly, although the response from the government was fast. Able to use their good reputation and strong credit rating, the government got organised quickly and equipment arrived with urgency.

The Netherlands is a leading example of an individualistic society, yet also considered a feminine culture where work-life balance is important and holidays and leisure time are part of daily life.

For the Dutch, the need to ensure everyone is included is a priority and consensus voting is the popular way to reach agreements. As a result, the Dutch have struggled with: working from home, staying away from family, not being able to enjoy life in the usual ways, quarantines, restrictions on holidays and the strains of social distancing.

United Kingdom –Approach: Herd immunity: The UK was completely unprepared for the pandemic. They had no provisions set aside and initially the government appealed to individuals to take measures themselves rather than giving any government directives.

When government action came, it was too late. Considered a masculine and individualistic society, Britain ignored the approaching crisis and refused to prepare for the uncertainties coming their way.

After a slow and lax response, the actions that followed were chaotic. There was a rush to get things organised once the full weight of the pandemic hit and financial considerations have been a driving factor in the government decisions.

New Zealand’s approach was also masculine, however here, power, distance and an individualistic society meant they approached Covid-19 in a different way to other countries.

The biggest difference in New Zealand was that they have a female prime minister who took care of people first, a stark contrast to the priorities of other countries with a masculine approach, like Australia and England.

In the U.S., scepticism and prioritizing the economy were more important than saving lives. America’s health system is expensive and often does not support the poor.

The U.S. is a highly individualistic society, that also values freedom and the rights of the individual. A combination of opposing values, ignorance, scepticism and a concern with financial gain have turned the USA into the biggest victim of the pandemic.

Culture definitely puts its stamp on how we approach crises

Our individual and collective national values impact the way we make decisions and react to different situations.

In societies where the government is perceived as the one that does the organising and decision-making, people will wait for someone else to take the lead. On the other hand, in countries were individuals are expected to get things, people act quicker.

In The Netherlands, politicians appealed to individual responsibility, yet did not dare to impose any measures that would be seen as unpopular because they would infringe the freedom and privacy of the individual.

In Spain and Italy, the smaller collective of family, close friends and tight communities, provide protection for each other. However, people expect the government to take the lead when important measures need to be enforced. Although instructions are often delivered forcefully, people accept and follow them.

Localised decision-making, based on lessons learned elsewhere, is the most effective form of instruction because communication and expectations can be tailored to suit the expectations of the individual and country.

These are fascinating insights that are still being played out on the world stage. As we continue to deal with Covid-19, it will be interesting to see how each approach develops over time.